Gallipoli Game at the Club 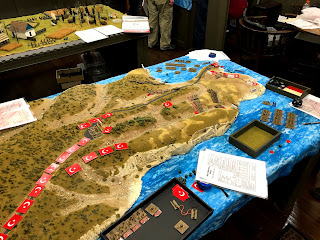 Last night at the club, Josh put on a superb 6mm game depicting the initial landings at Gallipoli.  There were 2 stunning board - one for the Helles point (on which I was the Turkish commander) and another for ANZAC cove (picturedat the end of this post).  The first picture shows my initial deployment using blinds.

Each side had a CIC who played but wasn't allowed to see the boards - we could only communicate via messages - command control was umm difficult!    There were 10 total landing sites and the British had to secure 6 to win the game.  Greg was our overall commander and decided to roll the dice and overload my table (which has 6 beaches) so I had an extra regiment (the 27th) to deploy in reserve behind the 26th which was deployed along tip. 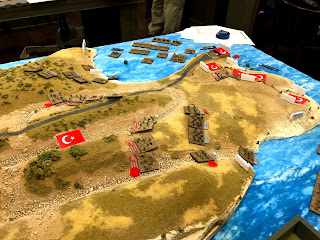 The British, under command of Ed as CIC, elected to land at night.  They gave up any ship-to-shore bombardment but gained 4 "unopposed" turns to land and move troops inland before the Turks could react - as long as they stayed 2 inches away from any Turkish unit.  Tom did just that and chose to land at 2 beaches and here was his progress at dawn (turn 5).  The troops stands in the water are waiting to land and there is a similar stack behind the beach in the lower right. 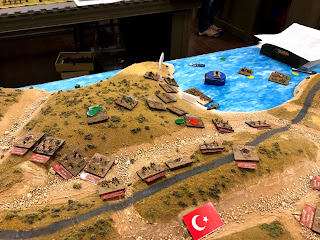 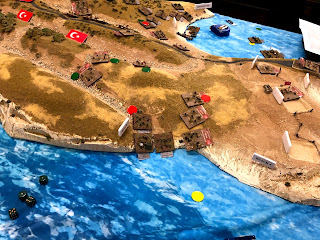 British losses started to mount as the dice gods favored the Turks this day.  I also took an extreme gable and pulled the battalion guarding the point to launch a counter attack on beach Y.  The British Brigade there broke twice and was pushed into the sea

On the upper beach, the British brigade also broke but was able to retreat back to defend a small pocket.  They could not be dislodged by the end of the game. 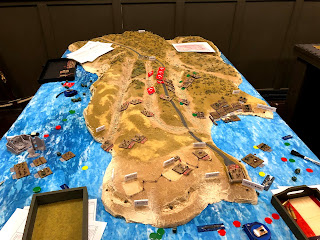 The view of the Helles after the battle. 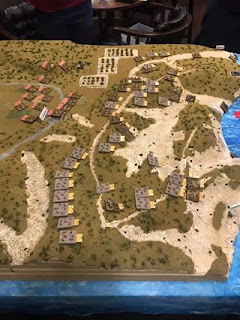 Things went much better for the Empire on the ANZAC board, as the Aussies made great progress inland - in part because one of the regiment defending in this area was transferred to my board.  Still Dave and his son put up stiff resistance against overwhelming British forces.

The battle ended with the British controlling 5 of the 6 beaches they needed so was a marginal Turkish victory.

We used the Great War Spearhead2 rules, which I have a mixed set of feelings about.  Some things are good and other are maddening.  I need to play them a few more times to give them a good shot.  They are simple so will work well in a convention game. 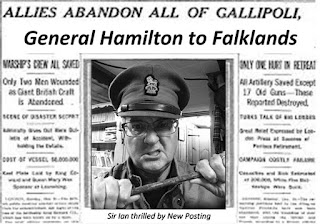 Ed, as the British CIC, seemed a bit doubtful about his prospects as he came to the club with some pre-made newspaper headlines that was sent out on facebook just after the battle.

It was a grand, very closely fought game.  Josh will be running the game at cold wars and if you're attending I suggest you sign up - it's well worth your time.

Wonderful terrain! Looks to be an excellent game. How was information fed to the CIC's? Once the allocation of forces was established, what other influence did they have?

The Aussies did incredibly well on their table but the Turk resistance was stiffening and I was about to shift an entire regiment north. Given the rough ground, it is a very difficult assignment for the British.

Codsticker - The CIC's were down in the basement of the club house and we communicated by short notes that the GM, Josh, would carry back and forth. If a side was granted offboard or offshore artillery support Josh would hand them a few bullets, with the caliber representing the gun class. the battleships uses .44's

There was mass confusion and general hilarity which made the game fun and VERY unpredictable.