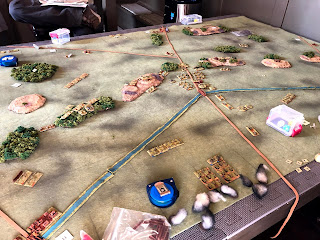 Last night at the club, Tom put on a fantastic WW2 game using his newly painted 3mm Americans and Germans.  It's very good that Tom did not waste his quarantine time on binge watching Netflix. 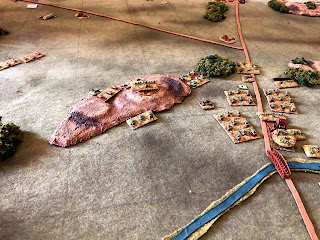 I've never experienced a 3mm game (each base was a company) and was both impressed with the look and playability.  We ere using some draft rules that worked pretty well.

Ed and I played the American while Tony and Josh were the Germans - it was a very close game but I think the edge went to the US but it was very close.  As usual, Ed did all the hard fighting while I just roamed around in my tanks taking pot shots at Stugs and running away (maybe fleeing) from Panthers. 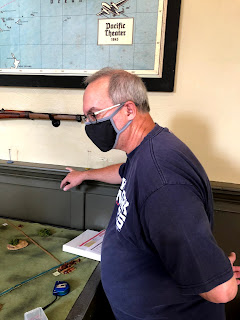 While the club is now re-opened, we still practiced social distancing.  Here you can see Ed modeling his very dapper mask - if only the rest of us mere mortals could be as debonaire as Ed while strutting around in such a stylish mask.

Ed, Tony and I have embarked upon a secret project over the next few months - you'll see hints about it in various posts.   In fact you already have......
Posted by Miles at 6:47 AM

It's not often you get to see a 3mm game in action so thanks for sharing some pictures. It looks really nice and I guess it means you can play much bigger actions.

It was a lot of fun - I really enjoyed the game. There may be a large force of ww2 Soviets on their way to my house as we speak. Teeny, tiny KV-2's are just to cute not to own.