Quatre Bras at the Club, Part 2 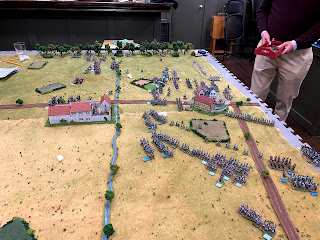 Last night we finished up the Quatre Bras game.  Tom and Ed returned to command the Allies.  For the French we had new commanders in the form of Greg and myself.  The ruleset was General D'Armee.  Since I was playing, I didn't take any pictures except at the end.

The game resumed at turn 8 and the French attack continuing with the Allies getting ground down.  Last game Josh had effectively formed a grand battery of all the French Artillery and it continued to pound the Dutch troops. 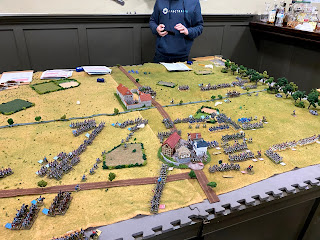 Greg sent in Jerome's Brigade, which had the best French troops in a series a attack columns and punished the Dutch the Dutch in the center.  At the same time both Ed and Tom launched calvary attacks on both Flanks - one forced a French brigade to retreat while the other was me by French Cavalry and pushed off.  Their two British Infantry brigades deployed along the cross roads and became a formidable defensive position.

After a few turns of trading blows, the French managed to break the 2 Allied cavalry brigades on either flank.  That brought our broken Allied Brigade tally to 4, which was enough for a French victory.  It was kind of a cheap way for us to win but there you go.  Taling on those British brigades would have been difficult as the French infantry was pretty chewed up by then.

Greg did comment that the club has played Quatre Bras a number of times with the "Age of Eagles" ruleset and every game resulted in a resounding French Victory.  It's a tough scenario for the Allies to win.  Our game was a little closer run but the French moved with a bit more alacrity than they did historically.  Perhaps a better way to balance the scenario is to put some limits on the French command dice.  I really like the overall scenario and will run it again with some tweaks to make it a little more fun for the Allies.