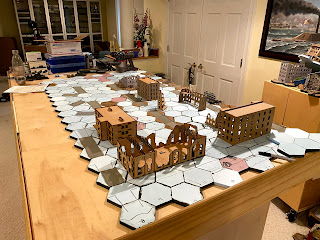 It's time to return to terrain making for the Stalingrad project.  I packed up the north section and started to layout the hexes and draw in the roads for the Central section of the map.  The overall map will be 10ft x 6ft. 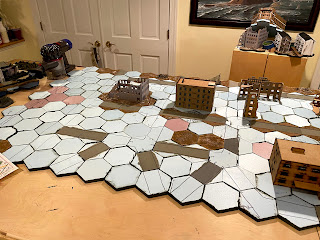 As you can see I ran out of hexes and need to cut another 140 or so to complete the full table.  Outside of the Soviet Bank building (lower right corner in the first picture) all of the building placements are just tests.  Once I get the road grid in I'll figure out how to best place them to balance historical locations and gamability. 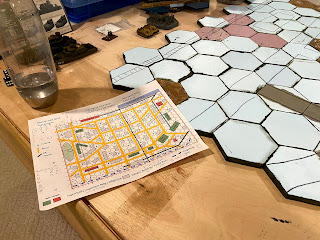 I'm working of a scale map I drew in power-point.  This diagram has proven to be really helpful in keeping track of the project as it's really easy to let such a large scale project like this overwhelm me.
The terrain design principal is historically important buildings such as the Univermag Department Store or Pavlov's house are located where they were historically, especially relative to one another.  You can see them on the diagram as either green (built) or red (to be built).  All of the other buildings (in light grey) will be a bit generic and placed more to simulate building density rather than actual historical location. 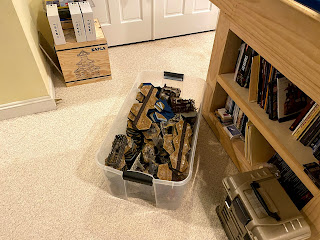 The northern section all packed up.  When I get the all clear from my lovely, yet fierce, Dr Wife I'll be bring this bin up to the club to start doing some test games with the rules.  I'll end up with three of these bins for all of the terrain - which is a lot but still transportable.
Reassembling the terrain will be fun.  I did mark the bottom of each hex with its corresponding row number and put them back in the bin in a somewhat organized fashion.  I suspect the first time I try to "reset" the terrain will be a disaster.  We'll find out.
One concern I have is that given the size of the table at 10 x 6 can players easily reach units in the center?  Yes, I am fearful of the dreaded gamer "belly smash" were players with ample "provision storage" accidently crush figures and terrain features along the table edge as they lean over.  I have committed this sin many times in the past and will likely do so again.  It shouldn't be a problem along the soviet side as it has the Volga river so there really isn't any elevated terrain features.  It might be an issue on the german side  but we'll have to see.  I may need to shorten the width to 5 feet which the design will allow without too much compromise.  One of the benefits of a hex terrain design is it pretty easy to make adjustments like that one.

Excellent progress on the project

Still looks like a lot of work needs to be done Miles. Still looks excellent as it is now.