Finished Roman Marines and a Return to Napoleonics 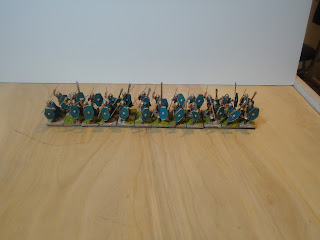 A bit of an eclectic set of output here are the Ubergeek's lair.  First off, I've managed to finish and base a 24 figure unit of Roman Marine Auxiliaries. These are the new Warlord Roman Marine metals and they are very nice figures.  They have a flowing cape which makes painting very easy.  This unit is the eighth in my growing 28mm Early Imperial Army. 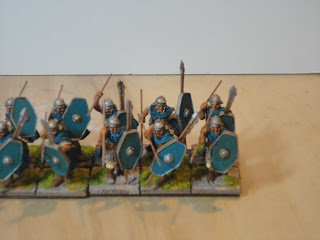 I've been building the army in anticipation of the new Hail Caesar rule set, which I have been test playing solitaire for about a month now.  I like the rules and their play style a lot.  I'm planning on building out the army to have 5 cohorts of Legionaries, 2 Aux Infantry, 2 Aux Cavalry and an artillery unit.  I just have 2 more 24 figure legionnaire cohorts to go!  I had wanted to host some play tests with my gaming group but just haven't had the time given work and coaching commitments.  There haven't been any pictures of the play tests as my opposing army consists of cardboard shapes to represent the units - it works for testing but doesn't support the "Hail Caesar" brand image
:) 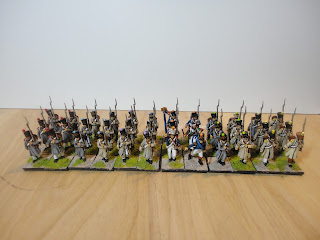 As the title indicates, I've returned to Naps in anticipation of a game "Architects of War Ernie" will be hosting on April 2nd.  I'll be contributing most of my French Army in the form of 7, 36 figure battalions of Line Infantry, a light cavalry unit and 3 guns.  Ernie indicated that I should leave the heavy cavalry and guard units at home as they don't fit in the scenario.  In order to get to 7 battalions, I need to base and scenic 2 painted units, the first of which is shown to the left.  One more to go and I'll be ready. 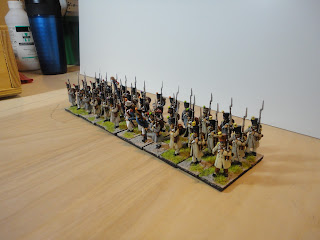 It's been a long time since my Frenchies have seen a tabletop and rolled dice in anger so I'm looking forward to the game.  Hopefully there will be a detailed battle report to follow.  We're expecting up to ten players so it should be a real show.  With the exception of my Guards, all of the infantry in my army are Perry plastics, which I find to be great models to paint and a lot more cost efficient when building large formations.  I think I saved close to $500 going with the plastics for the "bulk" units.
Posted by jmilesr at 11:29 AM

Nice to see some Napoleonics finally! They look great. Make suer you post a picture of your complete French army, also look forward to your battle report.

Very good minis, the Napoleonics look really good. I used to play 20mm in all my favourite periods (ancients, napos and WW II) but 2 years ago I moved to 28mm for WWI and WWII and I dont' think there's a way back now.

Both your units look great! I'm also planning on doing some Perry French for the Lasalle rule set and would like to see your whole army.

Nice looking Romans. 7 36-man battalions of French! Wow - that is impressive. I'm happy to hear of your savings using the fine Perry plastics. I think they are perfect for building big battalions - their marching poses (in greatcoats too) and tough plastic are a boon. Regards, Dean

Two great looking units. I noticed you have based the Romans as singles for Hail Casear. Are you going to use movement trays?

Thanks for the comments

Beccas: I base each 28mm figure on a 20x20mm base that has a magnetic bottom. I usually then arrange them on 60x40mm unit bases - that allows some flexibility to adjust for rules that use figure removal (WAB) and those that don't (Hail Caesar)

first time i have seen roman Marines as models. great paintjob on both units
Cheers
paul

Great work! I like the Marines. Look forward to seeing your Imperial army for Hail Caesar!

Love the Romans - like the other guys commenting, I'm looking forward to seeing your whole army :-)

Thanks for the nice comments.

I'll get some photo's of both armies up on Saturday and, will have a lot of game pictures from Saturday night game.