Colonial War Gaming in the Sudan 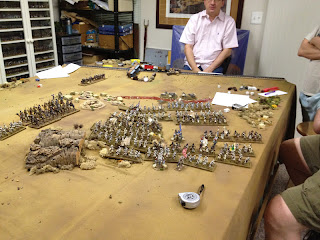 Last Sunday I had the opportunity to play in a very fun Colonial game hosted by Bob G is his fabulous game room.  The players were Dick and Ernie commanding the stalwart British with Les and myself commanding the cunning Sudanese.  Our host Bob was the GM and did a superb job both setting up the game and explaining the rule to us (of course, in my case, he had to re-explain the rules several times!) 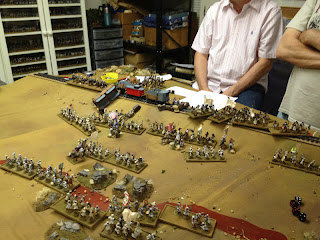 The game was a race to a derailed train and the second picture shows the high water mark of the Sudanese.  Let's just say we almost got there but superior British firepower and some poor movement dice rolls slowed out attempts to throw of the yoke of British Colonial rule - at least for this time!  I'm hoping for a rematch. 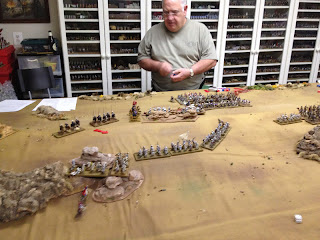 I really liked the colonial gaming theme which pits very different forces against each other in unique settings.  I must say the Bob's collection of colonial miniatures (which occupy a good part of the cabinets in the background) is very impressive.

I am tempted to start my own colonial army given the experience.  Of course, I don't really "need" another era to game, however these decisions are never made from a logical "needs" based analysis.  With Historicon coming up (along with it's large vendor hall) thinking about a new "era/army" is a very risky proposition!

Do it - you know it makes sense!

Good stuff! You can never have too many minis can you? :)