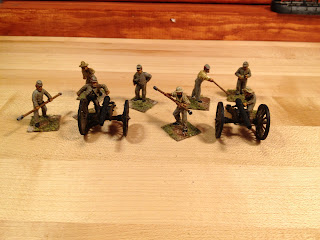 Last Wednesday was a "snow day" here in Maryland and I put that time to good use - well good use in terms of miniature painting.  I managed to start and finish 2 Perry 28mm ACW gun crews and a 24 figure infantry unit.

The artillery figures were bare metal and the plastic infantry was still on the sprue when I started so that was blazing fast for me! 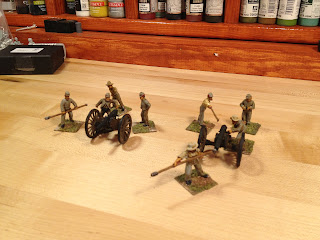 Pictured is the second artillery battery for the Confederates and I used the rifled gun barrels rather than the smoothbore Napoleons.  I'm planning 4, 2 gun batteries for the confederates so I have 2 more to do. 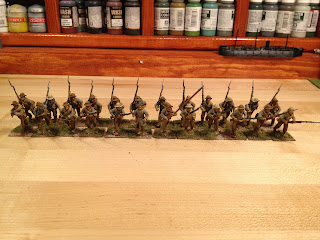 The infantry unit was modeled with slouch hats rather than Kepi's and has yet to be designated.  I'm think of replacing the flags I've been making myself for all the units with professionally made ones.  I saw some at Cold Wars and they just look a lot nicer than mine. 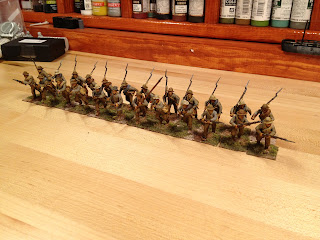 As I've said before, I'm a big fan of the Perry Plastic confederate models.  Very easy to assemble and paint.  I have 5 regiments of a planned 10-12 done and should be able to knock the others out well before Historicon in July. 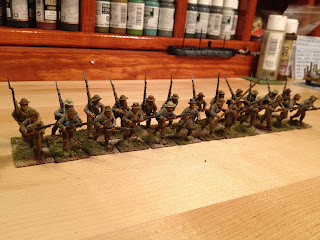 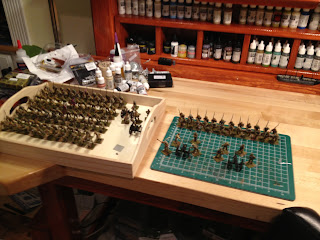 Here's the Confederate army to date, 5 of the 6 completed infantry regiments, 4 guns and crews.  Not pictured is a sixth regiment of Confederate Zouaves which were painted for me by Mike M. (and, therefore, much better than what I can manage).

I picked up A LOT of Perry ACW metal figures at Cold Wars and will start on the command stands, mounted and dismounted calvary and gun limbers shortly.  Both the Union and Confederate armies will be exclusively Perry figures as I just haven't found anything that matches their quality.

You are tireless, Miles. Impressive production and quality as always - on the heels of the recent convention and games no less. Best, Dean

You have been a busy boy! Nice bit of work done while the snow pelts down. At this end of the world we're sweltering - not nearly as much painting work being done! Your Rebs look great and that's some army you've put together. You're right about the Perry's - apart from some lines of figures in general nothing comes close in overall quality. I particularly love their galloping limber and six-horse team!

The worst thing that could happen to me at this point is for an entire new historical setting to become appealing to me... but these guys look great. I must be on my guard!