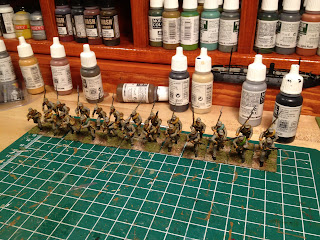 I've completed my fourth 24 figure Confederate Unit (Perry 28mm plastics).   That give me 5 regiments completed (4 regular infantry and 1 Zouave) out of a planned 10 regiments so I have a bit more painting to get done. 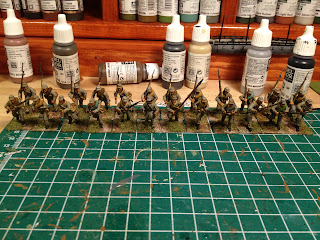 I still need to add a flag and may pick a bunch at Cold Wars this weekend. 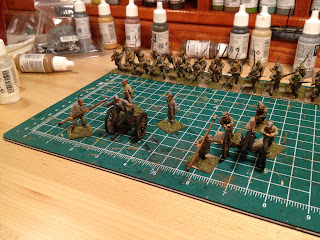 In addition to infantry, there's also been some artillery added to the mix with 2 completed Perry Napoleonic guns and crews.  These are Perry metals and what can I say the figures are superb and deserve a much better paint job than I can manage! 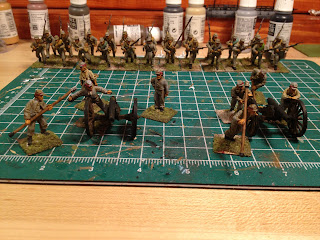 I really like the poses of the crew to the right - running out the guns.   As for the Union forces to oppose the confederates, I've chosen to cheat a bit and outsource the bulk of the painting to MMPS.  MMPS did a great job on some Peninsular / War of 1812 Brits for me and I recommend there services highly. 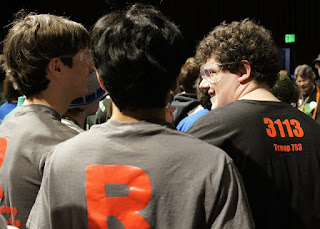 Since this blog is becoming as much a Robotics blog as a miniature one, here's a picture of my son (right) right as he was learning that his team (3113 "Some Disassembly Required" had earned a spot in the World Championship.  The picture was taken by the coach of another team.

The team has been very focused as they prepare for Worlds, which are held in St Louis, MO from April 24-27.  I doubt there will be a lot of progress on my planned Historicon game until May.
Posted by jmilesr at 6:19 AM

Lovely ACW stuff there mate and congrats again to the young fella!

Great stuff all round, Miles - nice one ;)