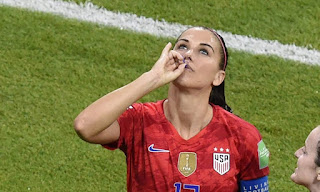 The US Women's World Cup team is in the finals again after beating merry old England today.  It was a great game and this American team is a lot of fun to watch and root for.

Sure they may be a little brash but who the hell cares - they play superb soccer and the tea sipping goal celebration was priceless.  I just couldn't help teasing my British friends.

Woo-Hoo looking forward to the finals.  There was some controversy at the start of the tournament about the women's team demanding pay parity with the men's.  On moral grounds they obviously deserve it and based on how their play on the field the really should earn twice what the men's team gets.  Maybe we could just get rid of the men's team and have these ladies do double duty.

twenty years ago I went to what, at that time, was the largest attended game in the history of women's sports at the stadium in New Jersey which was packed. I still remember Mia Hamm's glorious goal to start things off. What a splendid year for our team that was and this team looks to be every bit as good.
My only regret this year is that victory in the semi finals had to come at the expense of Great Britain. I wish them all sorts of luck in the match for third and sincerely hope that they will continue to play as well as they showed that they can.

It was a good game and the USA were the better team.