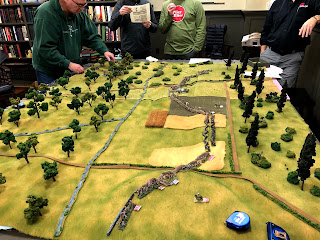 Last Monday at the club, Josh put on a fantastic ACW game using fire and fury regimental and his 15mm ACW collection.  We refought the battle of Honey Hill in 1864 from Shermans march to the sea.  Tony and I were the Confederates and Greg, Ed and Keith the Union.

The Union forces outnumber the confederates by close to 3:1 but the Rebs have fortified positions 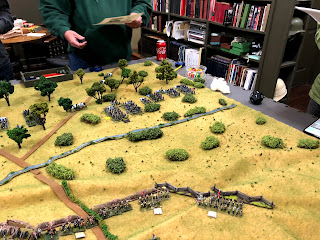 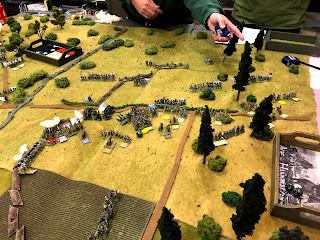 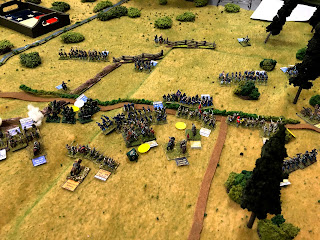 The confederate breastworks are eventually overwhelmed 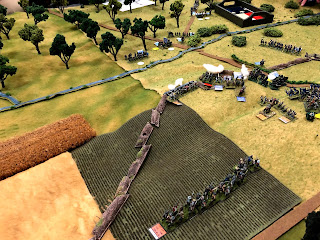 I tried shifting some regiments to meet the Union attack but did so too late, dooming Tony and I to defeat.  Just after this picture was taken, the CSA force reached it's break point and the game was called.  It was a lot of fun to play regimental F&F again. 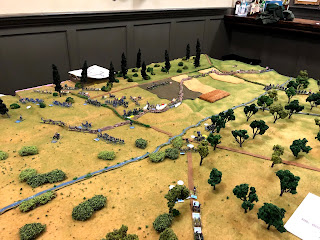 A view from the Union side.

I was able to get to the club a bit earlier and was also able to play a quick game of Churchill from GMT games.  Its a very fun and interesting card driven game of conferences between the allies to during the course of WW2.  I found it fascinating and want to play again.
Posted by Miles at 5:50 AM

That is a lovely table, I wrote about that battle and played it once (I think) last century.

I love F&F although I only plat the first edition brigade level rules.