War & Empire Kickstarter Arrives: Can a Leadpile Ever be Too Big? 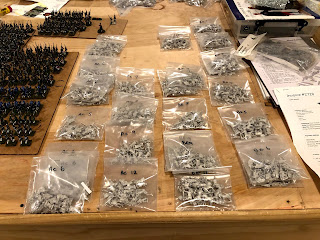 Kickstarter can be a wonderful / terrible thing.  I eagerly backed West Wind productions War & Empire III (after doing War & Empire II back in 2016) and the new miniatures just showed up today.

There are 30 packs of minis - 15 for an Early Byzantine army and 15 for an Arab Conquest army.  These will go nicely with my Early Imperial Roman and Sassanid Forces.

The figures are 15mm in scale and paint up nicely.  There arrival is timed very nicely in anticipation of the upcoming analog hobbies painting challenge.  Hmmm, Byzantines, Sassanids and Arabs - I wonder if a campaign is in the works?

Maybe this is why I was building extra storage.....
Posted by Miles at 7:01 AM

Email ThisBlogThis!Share to TwitterShare to FacebookShare to Pinterest
Labels: Ancients

If your leadpile doesn't have snow on the upper slopes your not doin' it right.

Nice to see people starting to receive their loot from the War & Empire Kickstarter. I'm still waiting for my Vikings and Normans to arrive.

More like 'terminal velocity' than a 'kick start' *drools*!

Excellent! Just enough time to get them all prepped before AHPC X starts!

Why Paul - that thought had crossed my mind too.