A ACW Ship, a Well and Romans 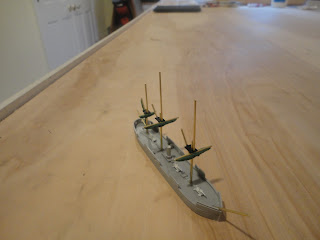 A bit of eclectic out put today on the modeling front.  After Friday's ironclad game, I decided to expand the fleet.  All of my current ships are models from Thoroughbred Miniatures and they are fantastic pieces.  I did pick up two Union frigates from Bay Area Yards and decided to build one of them, the USS Monogahala, this morning.  To be honest I was disappointed with the model's casting quality and sparse detail parts.  The masts that came with it are very thin white metal that just will not hold up on the table top.

I decided to chuck the masts that came with the kit and scratch build my own from brass rod, plastic and green stuff for the furled sails.  The first picture shows my progress so far and I'm satisfied.  Once rigged, I think the model will look fine.  There was also a great deal of flash and casting knobs I had to remove from the hull which was a bit of a pain.  We'll see how it turns out over the next few days. 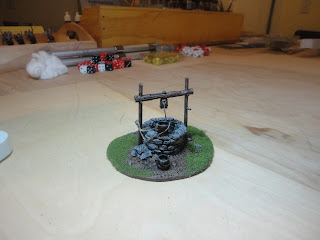 I also finished up the Well kit from Architects of War.  It's a nice, simple kit and the casting is top notch - zero flash or bubbles.  The well is scaled for 28mm and will make a nice accessory to an upcoming skirmish game.  The kit even comes with the thread for the bucket. 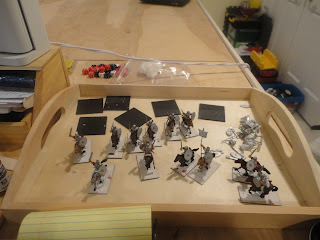 Lastly, I made some progress on my Roman Auxiliary cavalry and should have these guys finished up in a week.  While I didn't plan on doing this my Roman army was expanded on Friday when I had the chance to purchase some of the new Warlord Roman Marines (think auxiliary infantry with cool capes!).  Ernie had just received a shipment from Warlord for AofW and called to let me know they were available.
Posted by jmilesr at 5:03 PM

Very nice model of the Monogahala, you've done a fantastic job on it so far.
And nice to see your Romans coming along, I'm interested to see you marines in the future.
Cheers,
Guido.

Lovely job with the well too - great stuff (I want one!)

So I got one and now its finished - I love it! Thanks for the tip :-D
http://tasmancave.blogspot.com/2011/03/review-well-set.html