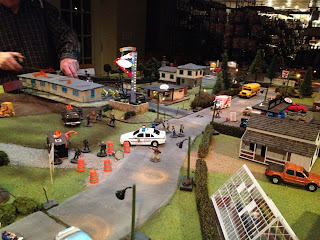 Ernie put on a fantastic 28mm Alien Invasion game tonight that had the real feel of XCOM in miniature.  The table was amazing and the game pitted local cops, the DEA, the US army, a mysterious government agency and local criminals against Aliens who had crash landed and were awaiting rescue.  Oh yeah, the Aliens had all sorts of crazy weapons including a virus gun that would turn humans into Zombies.  In other words the game was a blast.  I just post a few pictures as Ernie will be doing one of his "Table Fable" posts about the game. 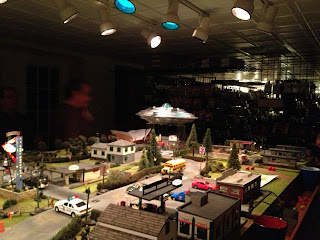 Here's a picture of the Alien mothership coming in the pick up the stranded crew. 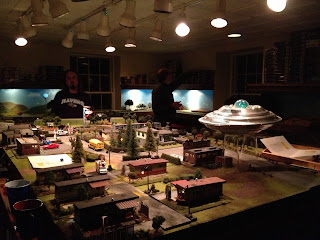 Another shot showing the table - I loved the trailer park.  Why do strange things always seem to happen near trailer parks? 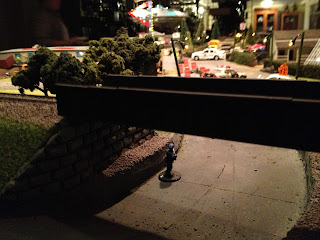 I had command of the local police and county SWAT.  Here's a pick of one brave officer returning to the fray after escorting some civilians to safety.  It's a pretty cool picture. 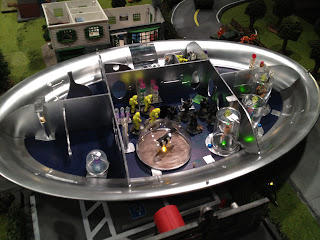 Oh yes, the mother ship had a full interior.  The humans managed to win the game as the guys in the yellow suits cut a hole in the top of the mothership and allowed my county SWAT team to get in and wipe out the Aliens after a few rounds of fighting.  Ernie has amazing game creation talents.

That is one atmospheric game table. It would be great for running a modern invasion type scenario as well. I'm jealous!

That is pretty darn cool! I love the 50's style space ship.

What a beautiful table, thanks for sharing. I don't approve of the yellow suits cutting holes perfectly good mothership.

Awesome game, I wish I knew someone who puts such original tables together. I personally lack both the necessary space and the funds.