More Progress on a Japanese Platoon for Bolt Action 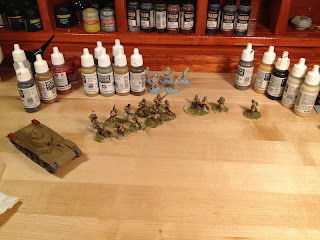 The first four elements of my planned reinforced Japanese platoon for use with the Bolt Action ruleset are nearing completions.  From left to right, a Type 97 Chi-Ha tank, a 10 man infantry squad, a medium machine gun w/ 3 man crew, and an officer.  The officer's 2 man escort are hiding in the back waiting to be painted.  Not shown in this picture is a US Stuart tank, which will be modeled as a captured vehicle. 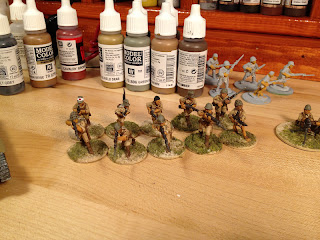 Here's a close up of the infantry squad, 10 riflemen plus a Light Machine gunner.  The figures are basically done with the exception of some facial highlights. 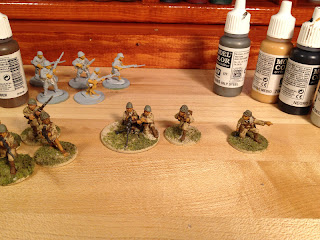 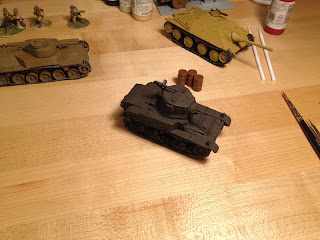 Here's a picture of the stuart along with a long forgotten Warlord Games 28mm Hetzer model.  I'm finishing that up as part of a contest over on the WWPD forum.

Hi, sorry for the random comment. I just wanted to let you know about a competition we're running at BenchVent.com aimed at model makers and figurine painters. In a nutshell all we're asking to enter is to send a picture of your workspace to be in with a chance of winning a desktop paint and fume filter. Please see http://www.benchvent.com/blog/show-us-your-workspace-and-win-an-exagon-r/ for full details - Thanks, Scott.

Your base vegetation is pretty neat, I can't zoom in close enough to see what you're using...

I didn't want to be interested in Bolt Action, but all the good work I've seen (including yours) makes me jealous.