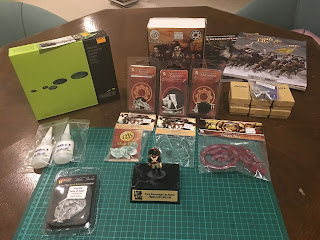 I'm back from Historicon and just finished unloading the car - whew!

Overall I had a blast and Mike and I ran a total 9 games over the three days with 8 players each.  I really enjoyed the con but I'm a bot tried and very hoarse - my wife didn't recognize my voice when I called while driving back.  Over the next few days I'll post some pictures of our games which I think were very well received.  But first, the contractually obligated "loot" picture.

Clockwise from the upper left - Steve McLauchlan "convinced" me to by an airbrush and recommend a grex model which he helped me pick out.  Next is a starter team and some extras for Guild Ball (yet another McLauchlan fueled expenditure).  Next up are 40 28mm War of 1812 US Infantry figures from Lon at Brigade games.

I also picked up some super glue, the convention give away figure and my games won an award. 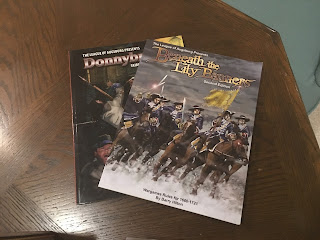 However what I'm most excited and grateful about are the two rulebooks that Clarence and Barry from the League of Augsburg gave me - The game they ran was stunning and I'm really becoming interested in the Pike and Shot period. Interested is an understatement, lets just say I'm hooked.

I didn't play any formal convention games this trip (too busy running my games.  I did, however get a chance to try Guild Ball and am really impressed with the elegance of the game system (hence the starter team purchase)

Over the next few days I'll post more detailed write-ups and pictures of the con.  Overall I thought it was a smashing success but it did feel as if attendance was down - especially of Saturday night.

Email ThisBlogThis!Share to TwitterShare to FacebookShare to Pinterest
Labels: Cons

I'm not sure if you're aware, but you managed to appear in several photos taken by Wargames Illustrated in your rather bright yellow shirt! :0

Glad you had a good time and congrats on the prize :)

Glad to see the 2 LoA books added to your collection.....so what you gonna paint up first with the new airbrush?

Glad to see the 2 LoA books added to your collection.....so what you gonna paint up first with the new airbrush?

It was good to meet you, Miles! Looking forward to seeing your upcoming pike and shot project...

glad you had a good time Miles.

Yes it was a very bright shirt wasn't it - suppose it's a good thing for a Gm to be highly visible!